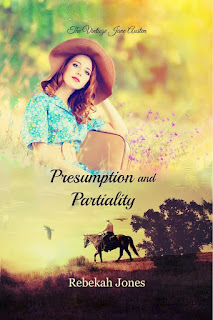 Title: Presumption and Partiality
Author: Rebekah Jones
Genre: Historical Christian Fiction
Release Date: November 27, 2017
Among the cotton fields and farmland of Gilbert, Arizona in the early years of the Great Depression, Mr. and Mrs. Bailey live a simple, but happy life with their five daughters on a cotton farm. When the wealthy Richard Buchanan moves to town, bringing his family, a friend, and a desire to learn about cotton, Matilda Bailey is convinced that he is the perfect candidate to marry her eldest daughter, Alice. Richard is cheerful, friendly, and likable. His friend Sidney Dennison doesn’t make such a good impression. Eloise Bailey decides he’s arrogant and self-conceited, but when Raymond Wolfe comes to town, accusing Sidney of dishonorable and treacherous conduct, Eloise is angered at the injustice of the situation. When the Buchanan household leaves town, Alice must turn to the Lord and face, perhaps, her most difficult test in trust, while Eloise takes a trip to visit her friend and may well discover a web of deceit that she doesn’t really want to believe exists. 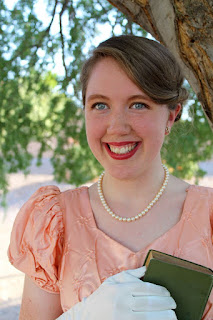 Rebekah Jones is first and foremost a follower of the Living God. She started writing as a little girl, seeking to glorify her King with her books and stories. Her goal is to write Bible-Centered, Christian Literature; books rich with interesting characters, intricate story lines, and always with the Word of God at the center. Besides writing, she is an avid reader, songwriter, pianist, singer, artist, and history student. She also loves children. She lives with her family in the Southwestern desert.

Why is he a Navajo? I’ve had more than one person ask me why I chose to make Sidney Dennison, the “Mr. Darcy” of my novel Presumption and Partiality, a Navajo Indian. When I commenced planning and research for placing a retelling of Pride and Prejudice in the 1930’s United States, I found myself drawn to the desert of Arizona rather early on. Specifically, the tiny farm town of Gilbert. I knew, however, that few rich people lived in that area; certainly not enough to create social rifts large enough to recreate the social differences of the original novel. I experimented in my head with a few different ideas, but the idea of Sidney as a Native American came to me one day and just clicked. I knew that I couldn’t fully pull off a Navajo who lived on the reservations. As much as I researched, I couldn’t quite get the feel. Yet, a man whose ancestry included a white man as a grandfather, who lived outside the reservations, though with relatives who clung to some of the old traditions, I thought I could do. I used to wish I were an Indian, in part because I wanted to have great tracking skills, live in a tee-pee, possess superb bow and arrow abilities, and I wanted to ride a horse. True, most of that did not enter a 1930’s novel, despite my Navajo cowboy, because the eras are different. Though, Sidney did get a horse. Or technically, several. Further, something about the silent, good-looking Indian appealed to me, much as I tend to shy away from writing about handsome and beautiful people, since they feel so common in fiction. The minute I began imagining the man with his Navajo ancestry, he just felt perfect. By the end, Sidney turned out to be one of my favorite characters. (I can’t ever pick just one in my novels.) I think I made a good choice and I hope my readers will agree!

The Bailey family has several five daughters and the mother of the family tries to play matchmaker. Of course she wants them to have a wealthy husband. The book is set in the year 1932 and in Arizona. The Bailey family had a cotton farm which was very hard work. It was mainly about three of the daughters. Alice, Eloise and Junie which was the youngest. Then there is is Richard, Raymond and Sidney. A lot of misunderstanding between them. That was very interesting. It wasn’t a real exciting book but it kept me interested so made it a fast read. A lot of surprises. I received an complementary copy of the book from Celebrate Lit.

Texas Book-aholic, April 24
red headed book lady, April 24
Reading Is My SuperPower, April 25
Seasons of Opportunities, April 25
Karen Sue Hadley, April 25
Just the Write Escape, April 26
Remembrancy, April 26
Two Points of Interest, April 27
Views from the Window Friend, April 27
margaret kazmierczak, April 27
Bibliophile Reviews, April 28
Inklings and notions, April 28
History, Mystery & Faith, April 29
Mary Hake, April 29
proud to be an autism mom, April 30
A Greater Yes, April 30
Fiction Aficionado, April 30
Among the Reads, May 1
Debbie’s Dusty Deliberations, May 1
Janices book reviews, May 2
Jeanette’s Thoughts, May 2
Carpe Diem, May 3
A Baker’s Perspective, May 3
Kaylee’s Kind Of Writes, May 4
With a Joyful Noise, May 4
Have A Wonderful Day, May 4
Pause for Tales, May 5
Simple Harvest Reads, May 5 (Guest post from Mindy Houng)
Artistic Nobody, May 6 (Spotlight)
Bigreadersite, May 6
Faery Tales Are Real, May 7
By The Book, May 7
Reader’s Cozy Corner, May 7

To celebrate her tour, Rebekah is giving away a grand prize of the complete set of the Vintage Jane Austen Collection!!
Click below to enter. Be sure to comment on this post before you enter to claim 9 extra entries!
https://promosimple.com/ps/cc8f
at May 01, 2018