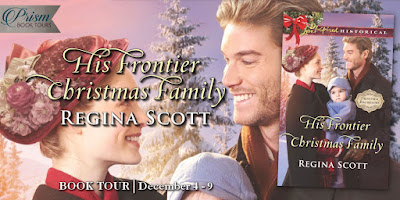 On Tour with Prism Book Tours

A Family Made at Christmas

After taking guardianship of his late friend’s siblings and baby daughter, minister Levi Wallin hopes to atone for his troubled past on the gold fields. But it won’t be easy to convince the children’s wary elder sister to trust him. The more he learns about her, though, the more he believes Callie Murphy’s prickly manner masks a vulnerable heart…one he’s starting to wish he was worthy of.

Every man in Callie’s life chose chasing gold over responsibilities. Levi—and the large, loving Wallin family—might just be different. But she can tell he’s hiding something from her, and she refuses to risk her heart with secrets between them. Even as they grow closer, will their pasts keep them from claiming this unexpected new beginning?

Other Books in the Series

Regina Scott started writing novels in the third grade. Thankfully for literature as we know it, she didn't actually sell her first novel until she had learned a bit more about writing such as vocabulary, sentence structure, and plot. After numerous short stories and articles in magazines and trade journals, she got serious about her novel writing. The Unflappable Miss Fairchild was her first novel to be published (March 1998).

Regina Scott and her husband are the parents of two sons. They reside in the Tri-Cities of southeast Washington State and are members of the Church of the Nazarene. Born in 1959 and raised in the Seattle area, Regina Scott is a graduate of the University of Washington. She comes by her writing talent naturally--both her parents are excellent writers in their vocations as teacher and electrical technician. Her mother envisioned the plot for "Sweeter Than Candy," the novella which was written as a tribute to her.

Regina Scott is a devout Christian and a decent fencer; owns a historical, fantasy, and science fiction costume collection that currently takes up over a third of her large closet; and has been known to impersonate an independent consultant specializing in risk communication.

The book kept getting better and better the more I read of it. Love the children in the book, especially the twins. Callie is taking care of her family while her brother is off trying to strike if rich panning for gold. Levi comes to tell her Adam past away and he is going to be their guardian and takes them to his family. Loved his family, his sister trying to play matchmaker for Callie to different ones. Loved that there was a Christmas play in the book. I received an advanced copy of the book from the author.

1 winner will win an autographed print copy of His Frontier Christmas Family along with a set of rustic burnt-wood Christmas decorations the Wallin family would be pleased to own.