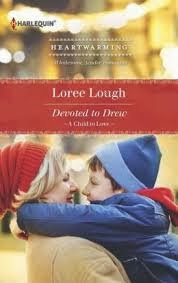 Logan was a football player but was told due to his concussions he cannot play anymore when he was twenty-five. Ten years later he meets Bianca who is a widow with a seven year old autistic son, named Drew. Logan has a sister with a autistic son also. He does commercials and one is for companion dogs which Drew has decided he needs a companion dog to help him. Also Logan is planning to build a school for autistic children and wants Bianca to work with him on it. I don't want to give away any more of the story. If I could give this book 10 stars I would, so well written, such a good book.


What others are saying:

"I love that Loree Lough's books so often raise awareness of social issues. In Devoted to Drew, her characters were realistic--and parents of children on the autism spectrum will relate to mom Bianca's attempts to single-handedly meet her son, Drew's, every need. Readers will not only enjoy the tender story, but will also come away with a better understanding of the challenges, victories, and joys of parenting a special needs child. Super book". -V. Herlocker


"This book was a great read. I really liked the characters of Drew, Bianca and Logan. Bianca was quite the independent woman out of necessity. I also liked that Bianca worked hard with Drew to help him on his way to achieving his potential. I really liked that Bianca put Drew first and foremost. I also liked that Loree made it clear several times that all children with autism are not the same!When I read the prologue, I wasn't sure where we were headed. As the characters and their relationship grew, I figured it out. The relationships between all the characters helped me understand who Logan and Bianca were and where they came from. I liked rich characters.I made sure that I had plenty of time to read this book once I started it. I knew it would be an interesting, fun, and worthwhile read. I was correct!" - Andre


Please leave any comments or questions below: